Nanomedicine is the basis of a new generation of drug delivery and molecular imaging techniques with an enormous potential for improving human health which opens new markets for the pharmaceutical industry (Petros and DeSimone 2010, Duncan and Gaspar 2011). Polymer Therapeutics are hybrid nanoconstructs that covalently combine bioactive agents and polymeric carriers and are considered one of the most successful nanomedicines (Canal, Sanchis et al. 2011, Duncan 2011, Duncan and Vicent 2013). 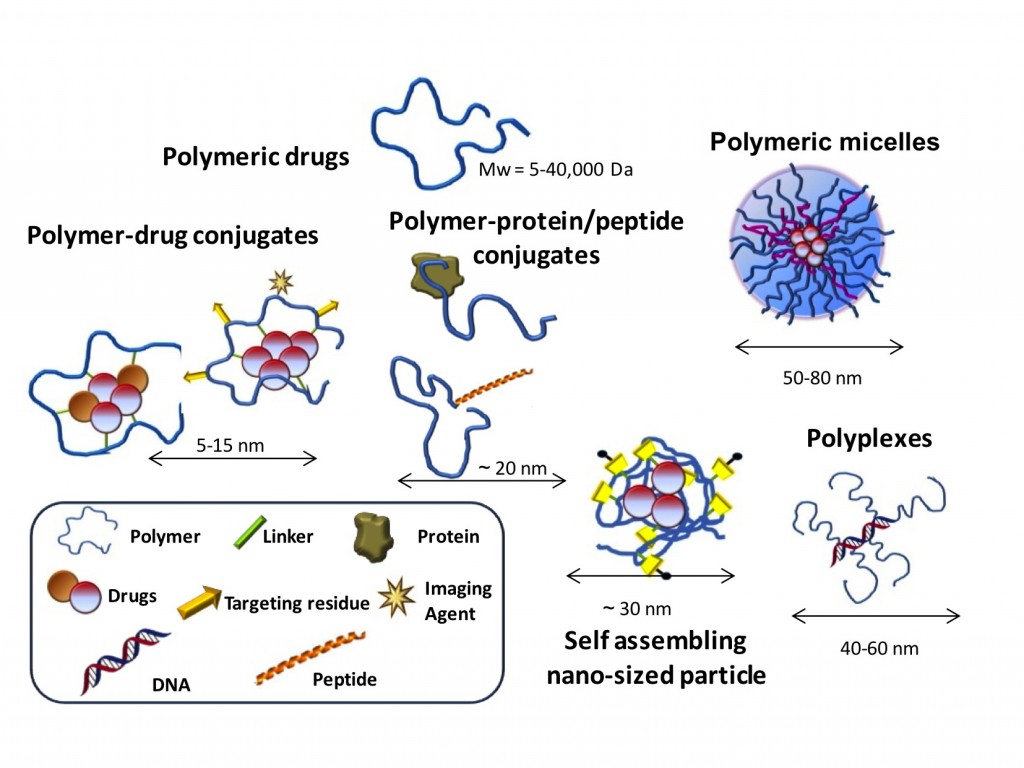 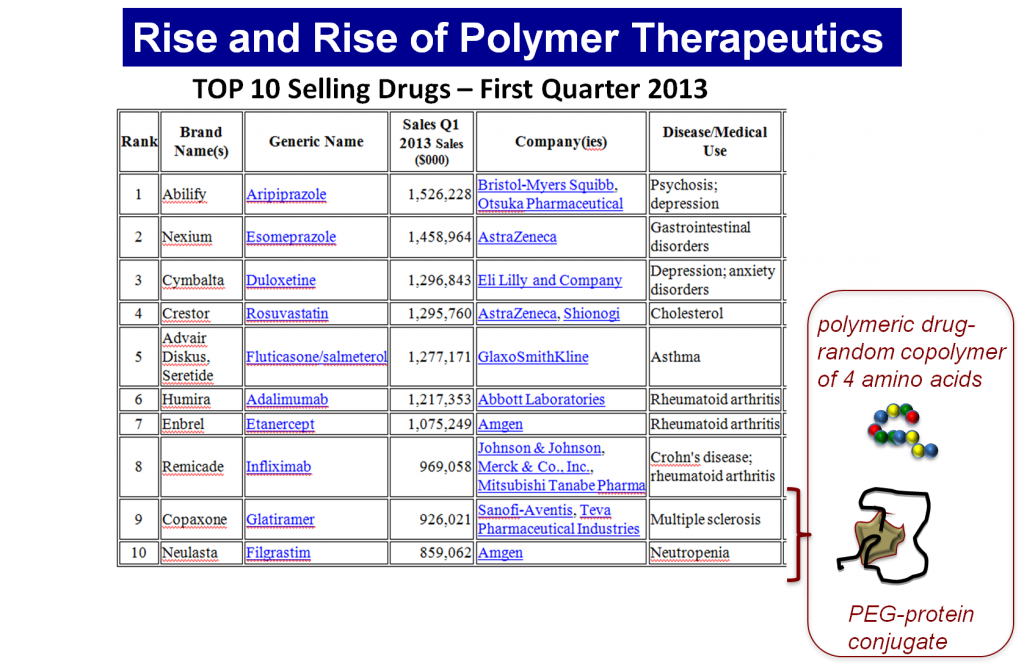 From an industrial point of view, they are considered ‘new chemical entities’, and not conventional formulations that simply entrap, solubilize, or control the drug release without any chemical bioconjugation (Duncan 2003, Vicent and Duncan 2006). Although many research groups are exploring the use of nanosystems in biomedicine, only a few are focused on the use of polymer therapeutics. Our research group is the first Polymer Therapeutics laboratory in Spain and one of the most known worldwide, and we are focused on the design and clinical application of these types of nanomedicines.

Due to their intrinsic characteristics (conjugate size <25 nm, multivalency, spatial control, and presence of biosensitive elements), Polymer Therapeutics (PT) can be designed to offer unique advantages:

(iii) PT allow a better control in the pharmacokinetics (PK) due to the presence of biosensitive chemical elements.

Translational investigation in PT has transferred 13 products to the market, including polymeric drugs (Dhal, Polomoscanik et al. 2009), polymer-protein conjugates (Veronese 2009), and polymer-aptamer conjugates (Keefe, Pai et al. 2010), which are all currently in routine clinical use. Although 16 polymer-drug conjugates are in advanced clinical trials, their progress have been very slow due to incorrect rational design or commercial issues. The inadequacy of specific polymers from a clinical point of view , low reproducibility in their manufacture, and the lack of validated characterization methodology have also limited this progress. 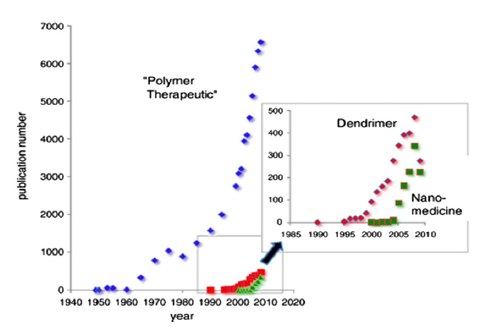 The vast majority of Polymer-drug conjugates use polymeric carriers such as 2-hydroxypropyl methacrylamide (HPMA), polyethylene glycol (PEG) or polyglutamic acid (PGA) (Canal, Sanchis et al. 2011, Duncan 2011, Duncan and Vicent 2013). Biopersistent polymers (PEG, HPMA) have disadvantages if chronic and/or high-dose administrations are needed as they can induce lysosomal storage diseases. Clinical evidence of intracellular vacuoles as a result of treatment with some PEGylated proteins (Webster, Elliot et al. 2009) reveal the advantages of the use of biodegradable polymers as carriers at the PK (Duncan 2003, Vicent and Duncan 2006) and clinical level. The potential benefits of controlled polymerization techniques are also emerging regarding the effect of size, shape, and deformability on biodistribution and cellular trafficking (Merkel, Herlihy et al. 2010). For example, branched architectures have a greater ability to penetrate biological barriers (van der Poll, Kieler-Ferguson et al. 2010).

Due to the complexity of the molecular mechanisms of human diseases, multiple drugs in combination are often administered simultaneously to modulate different pharmacological targets and so improve efficiency and reduce the resistance to treatment. An increasing number of polymeric conjugates are being used clinically in combination with drugs and/or radiation (Opaxio®, PGA-Paclitaxel conjugate, in combination with radiotherapy have been designated as orphan drug for glioblastoma treatment) (Greco and Vicent 2009, Canal, Sanchis et al. 2011, Duncan 2011, Duncan and Vicent 2013). 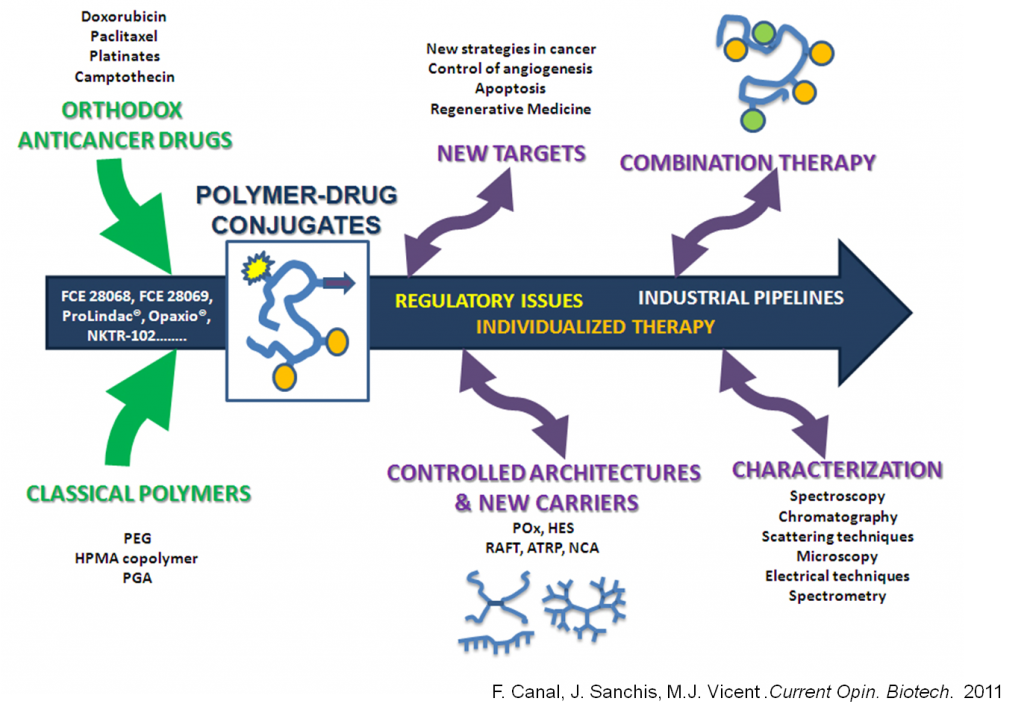 The use of a single polymer for multidrug transport is an even more interesting option supported by clinical data (phase II / III) of the combination liposomal systems CPX-1 and CPX-351 developed by the Canadian company Celator Pharma (Feldman, Lancet et al. 2011).

Finally, it should also be noted that clinical evidence shows a clear response variability to such therapeutics in patients. Both tumor specificity due to permeability and retention effect (EPR effect) (phenomenon that rises from the hyperpermeability of the tumor vasculature) and the presence of the necessary conditions to activate some conjugates (i.e. Phase III Opaxio by cathepsin B, highly dependent of estrogen levels) (Canal, Sanchis et al. 2011, Duncan 2011, Duncan and Vicent 2013) can very between patients, and, therefore, biomarkers are required to follow clinical responses.

There is a fantastic opportunity to apply these concepts to new molecular targets of clinical relevance in areas of medical need, such as metastatic or recurrent tumors and neurodegenerative diseases. This represents the overall objective of the Polymer Therapeutics Laboratory in the CIPF. This includes the consolidation of converging aspects of our recent work to carry out interdisciplinary research related to the rational design of new therapeutic multicomponent polymers, their physico-chemical characterization and optimization for the treatment of advanced metastatic tumors and neurodegenerative diseases (Alzheimer and spinal cord injury). Parallel structure-activity relationships will be studied against the underlying mechanisms of action in clinically relevant models. 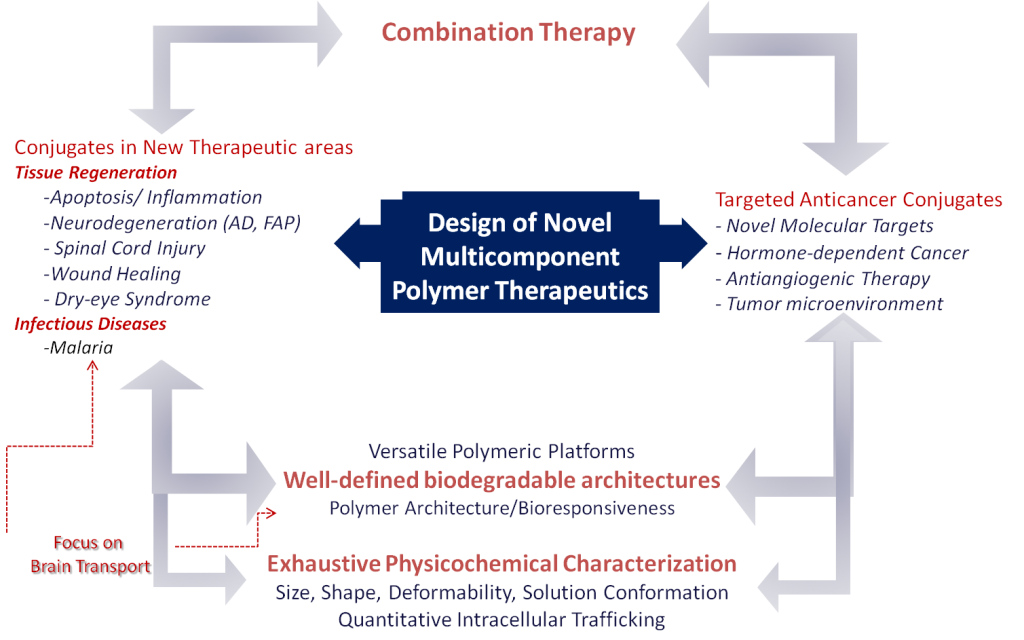 Our main research interests are reflected in the relevant scientific activity carried out by the group since its inception in June 2006 and is summarized as follows: 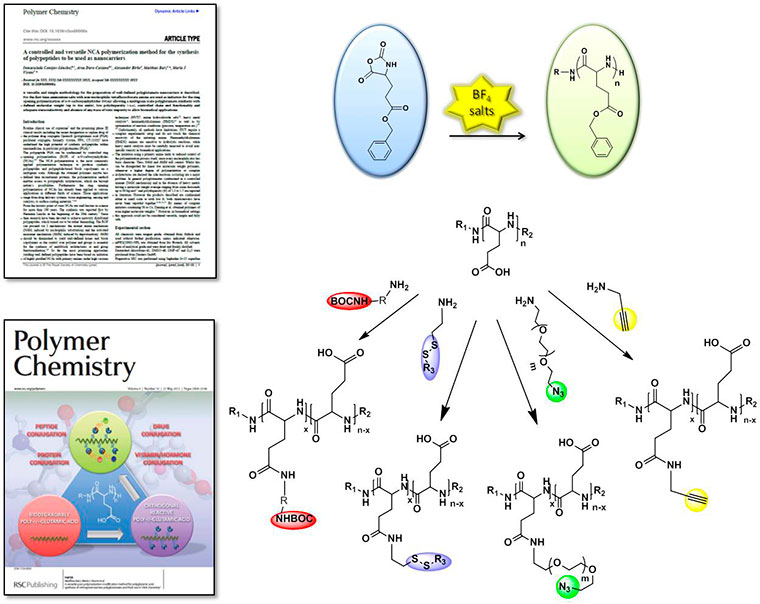 (ii) Development of polymer combination therapy. We are pioneers in polymer combination therapy (Vicent, Greco et al. 2005, Greco, Vicent et al. 2007) as a new strategy for the treatment of advanced breast cancer (endocrine therapy plus chemotherapy) by conjugation of two drugs in the same polymer matrix, a strategy that ensures the simultaneous transport of both drugs to the same cell. This concept has been strengthened in recent years in the lab (Eldar-Boock, Miller et al. 2011) and with the first liposomal combinations in clinical trials II/III. Polymer-drug conjugates have additional advantages when compared to liposomes, given that they offer greater control over the release kinetics of each drug, thus enhancing their possible synergism effect (Vicent, Greco et al. 2005, Greco, Vicent et al. 2007, Greco and Vicent 2009, Eldar-Boock, Miller et al. 2011). In collaboration with Dr Schwartz (Vall d'Hebron Research Institute) and Dr Lopez (Instituto Valenciano de Oncología), we are currently applying the concept of combination therapy for advanced prostate cancer. 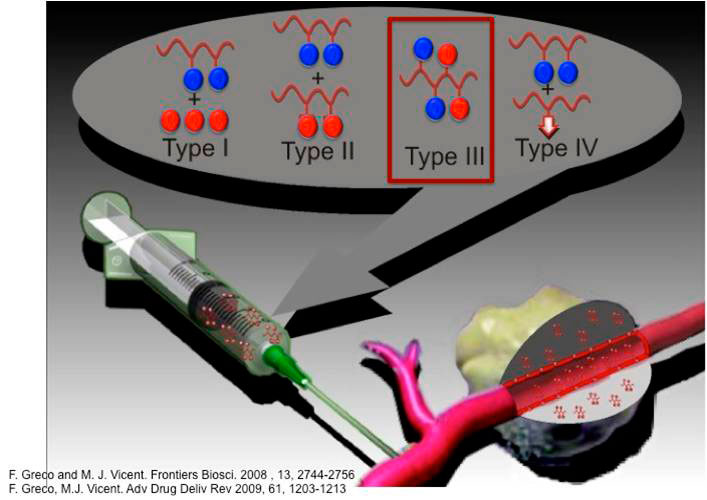 (iii) Use of advanced physico-chemical characterization techniques and the definition of structure-activity relationship in the context of its biological use. We are pioneers in the use of techniques such as Small Angle Neutral Scattering (SANS) (Paul, Vicent et al. 2007, Gimenez, James et al. 2012), and NMR techniques such as Pulsed-Gradient Spin-Echo NMR (PGSE-NMR) to study the conformation of polymeric conjugates and their diffusion coefficients in biologically relevant media. These techniques have been widely used in our group in collaboration with Dr Paul and Dr Pineda, strengthening our ability to characterize complex structures (Duncan, Gilbert et al. 2008) and new drug combinations (Vicent, Greco et al. 2005, Greco, Vicent et al. 2007, Greco and Vicent 2009, Eldar-Boock, Miller et al. 2011) as well as the monitoring of the interaction of the conjugate with its molecular target (Vicent, Cascales et al. 2010). 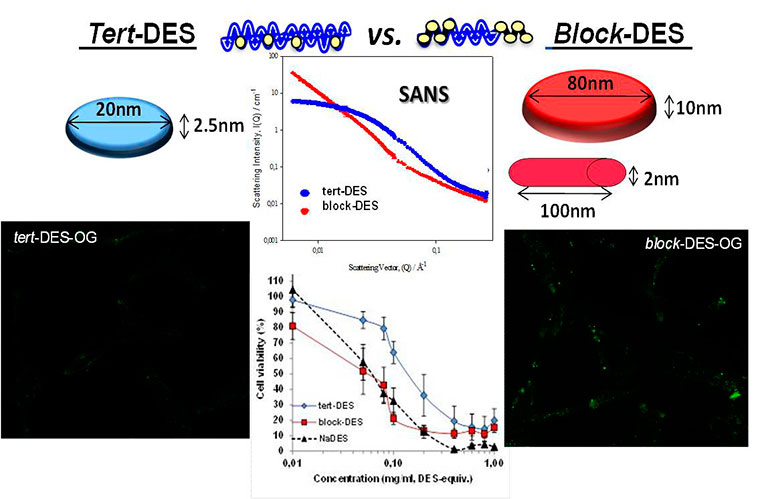 (iv) Design of quantitative methods for the study of cellular trafficking and in vivo fate of the nanoconjugates including subcellular fractionation, Amnis Imaging Stream, NMR probes for endocytosis (collaboration with Dr Pineda), and in vivo monitoring. 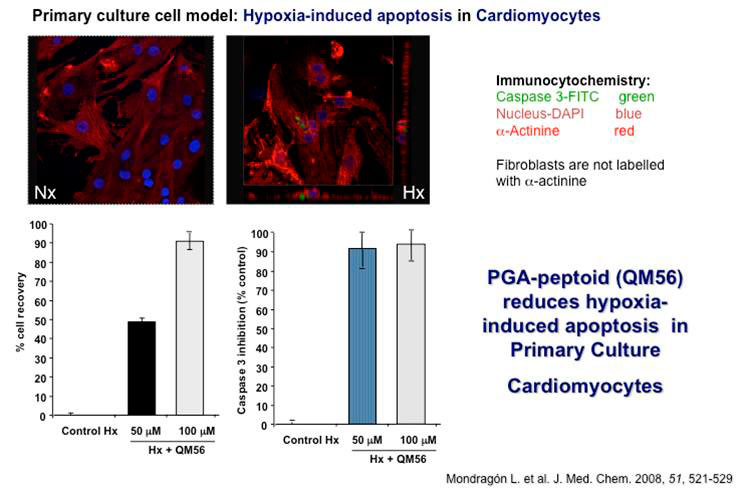 We also developed the first conjugates for the treatment of sepsis. 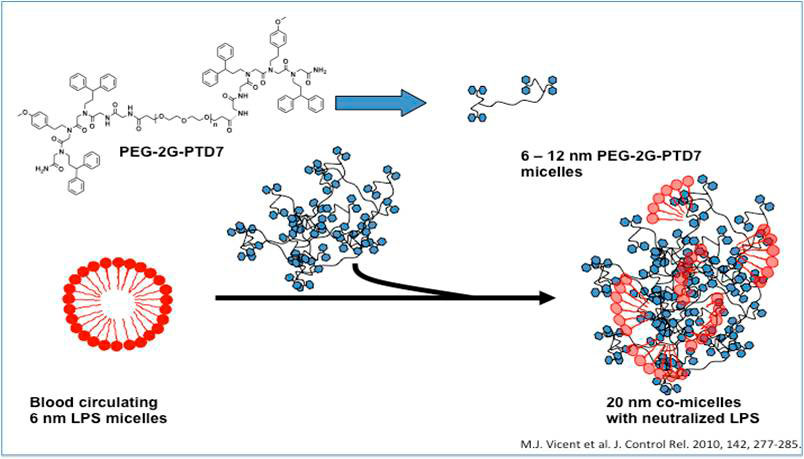 In collaboration with Prof Saraiva (IBMC, Portugal) conjugates with the aim of targeting amyloid related diseases of the peripheral nervous system have been developed (VICENT and Conejos 2014, Conejos-Sanchez, Cardoso et al. 2015). 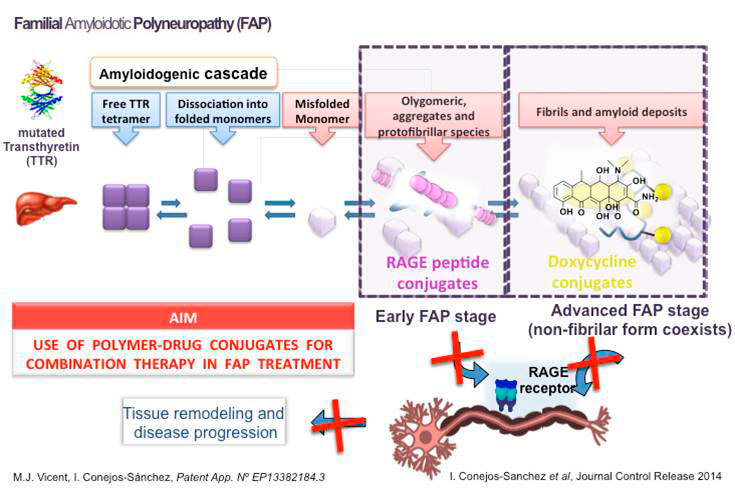 Within this line of research and with a view to applications in regenerative medicine where a controlled release is required in a localized manner, the design of hybrid systems (scaffold-nanoconjugate) has been carried out for the release of both drugs as well as low Mw proteins (collaboration Prof Monleón (UPV)). These systems are currently being implemented in spinal cord injury in collaboration with Dr Moreno (CIPF).